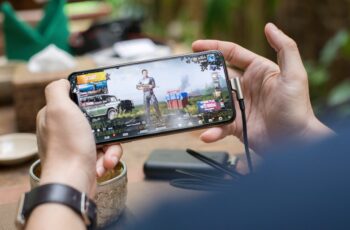 Top 5 Games You Can Play Anytime

Imagine you’re on a night out and the person you’re supposed to meet texts you that they’ll be a little late. You don’t want to sit around staring at a potted plant while you wait. Luckily, there are a ton of entertaining games you can play on your phone.

Today, we take a look at the top 5 games you can play anytime, anywhere.

It’s difficult to believe that mobile games offer any type of benefit. After all, many of us have been scolded by our parents for “spending too much time playing mobile games.” However, there is more to mobile games than meets the eye.

While there are a lot of fun mobile games circulating the internet, there are also some that focus on developing the mind. One great example of this is puzzle games.

On top of improving a person’s mood, puzzle games can also train the brain to recognize certain patterns and signals. This increases brain capacity as well as improves cognitive processes.

Besides puzzle games, there are other mobile games that people can play and benefit from. Here are a few that you might find interesting:

Top 5 Games You Can Play Anytime

Two Dots is available on both iOS and Android devices. And while the game may not look like much, it can get gravely addictive the more you play it.

It has over 900 levels and various modes of difficulty. There are also different variations of the game available on the Apple Store and Playstore.

To play the game is simple:

You connect same-colored dots to remove them from the board. Each level will have different numbers of dots.

As you move higher up the ranks, the more dots you’ll find on your board.

Some combinations can help you collect dots much faster. You can also win power-ups and bonus points along the way.

If you’re more interested in RPG games, then AFK Arena might just be the game for you.

Developed by Lilith Games, this particular mobile game takes you on an epic adventure where goblins, elves, and other magical creatures come to life.

You can collect heroes and develop spells. On top of that, you can connect with other people across the world who are playing the same game.

It’s much like Dungeons and Dragons, only on a mobile.

Candy Crush took the world by storm when it first came out in 2012. Almost every mobile phone in existence had it installed.

Today, Candy Crush has several variations available on both the Apple Store and Playstore.

If you’ve never heard of Candy Crush (however unlikely that might be), the mechanics of the game is straightforward.

You swipe candies left, right, up, or down to remove them from your board. Perform combinations to meet goals much faster or win awesome prizes and power-ups.

The great thing about this game is that it’s child-friendly. Almost anyone of any age can play it — as long as they can hold a phone.

Originally introduced as a fun PC game, Plants vs Zombies now has a mobile version.

And it’s just as fun!

The mechanics of the game are pretty similar to that of the PC version. You plant different crops on your lawn to defend your home against a horde of zombies.

It introduces a couple of new characters in the game. So, expect the story to be slightly different from the PC version.

There are also new crops and power-ups available, so gameplay can be much more exciting.

The game is available for download on both Android and iOS devices.

Ever dreamt of running away from the police on a skateboard in the subway?

Neither have we — but just in case that’s something you find interesting, we included this exciting little game for you to check out.

Subway Surfers is much like Temple Run, where you run endlessly through a maze of railways. Instead of a monster, you’ll be chased by a single police officer on the tracks and if you get caught, it’s off to the sweatbox with you.

The goal of the game: Don’t get caught and Collect as many gold coins as you can.

Coins can be used to open different levels and purchase other characters. You can also use them to purchase special abilities and power-ups.

How to Choose a Game That Suits You

Not all games are for everyone. There are certain games whose mechanics or goals might not sit well with other people.

In that case, having the following video game collecting tips should give you a great advantage:

Why are you looking for a game to play? Is it for entertainment or do you want to relax? Once you know your ‘why,’ it’ll be far easier for you to choose a game to play.

The best way to gauge the probability of you liking a certain game is to read reviews from people who’ve already played it. There are plenty of gamers on Reddit who are more than willing to share their thoughts about games. You just need to know where to look.

If you’re curious to see how a certain game plays out, there shouldn’t be any reason for you not to buy it. After all, it’s just a game.

And that concludes our list of the top 5 games you can play anytime and anywhere. Feel free to check out any or all of these recommendations on your phone. Don’t let the boredom of the day beat you! I think you will enjoy there top 5 games, and now you can be able to find your best game.